Man vs Machine: 7 Areas We Are At Risk

The boffins at Betway have taken a look into the areas that us measly humans are about to be overtaken by our robot counterparts. The following categories may make for some slightly scary reading…

You may think you’re pretty good at your job, but how do you reckon you’d fare against a robot? Some of the world’s biggest brands, from Adidas to Amazon, already rely on machines which are considerably faster, stronger, and more accurate than their human counterparts. It’s no surprise this technology is proving popular with businesses, but mere mortals are understandably concerned about the rise of robots in the workplace.

It’s estimated that up to one-fifth of the global workforce could lose their jobs by 2030 due to robot automation, affecting 20% of UK employees. Machine operators and food workers are most vulnerable, but some unexpected roles are also at risk. Google has already revealed its advanced AI bot called Duplex, which conducts “sophisticated conversations” and completes admin tasks such as booking appointments. Robots are even moving into creative sectors. Approximately 850 articles from The Washington Post’s 2016 US election coverage was written by a robot reporting programme called Heliograf.

Thanks to the algorithms driving apps like Tinder, Bumble, and Hinge, we have already begun relying on AI to find us a mate and sort out our dating lives. There are now apps dedicated to specific personality types and the traits you look for in a partner, whether it’s religion (JDate for Jewish singletons), shared interests (Tastebuds for music aficionados) and, in Hater, an app to find someone with the same pet peeves as you. And these algorithms are only going to get more complex. According to eHarmony, AI will be able to predict sexual compatibility by 2025. Great news if you’re too busy, or indeed too shy, to go out and meet someone the old-fashioned way.

But for some, humans just don’t do it for them anymore. An increasing number of people are in favour of letting machines be involved in other, more intimate, aspects of their romantic lives. Havas surveyed more than 12,000 people from 32 countries and found that 25% of millennials would be open to having a relationship with a robot, believing it will be normal for humans to develop feelings for a robot and even fall in love. David Levy, the author of a book on the love between humans and robots, has even predicted that robot marriages will be legal by 2050. 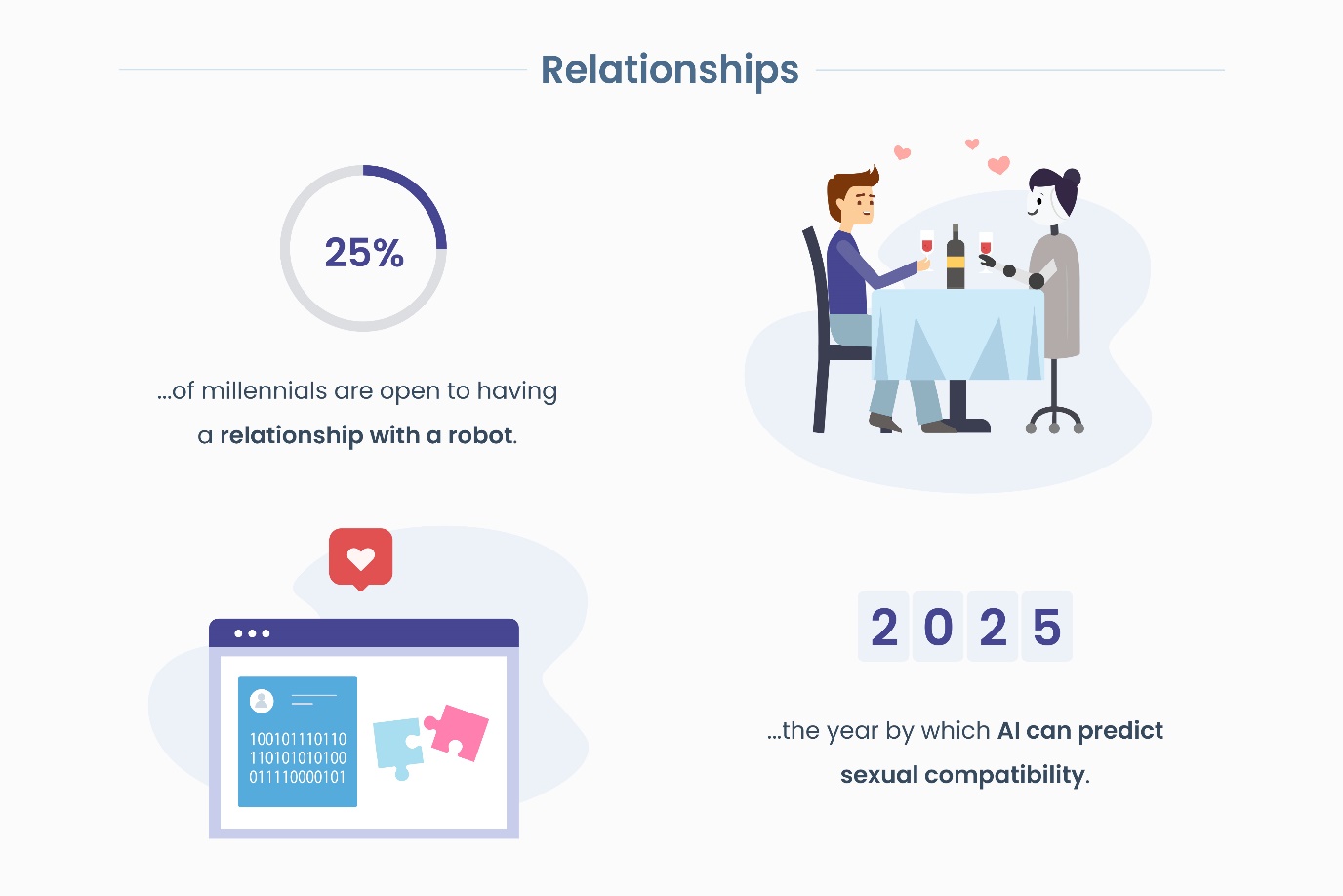 How many times a day do you check your step count or see how many calories you’ve burned? Whether it’s on a smartwatch, phone, or a dedicated fitness tracker, these little nuggets of health information are becoming hard to ignore. But experts are determined to bring technology further into the healthcare fold. We’re talking robot physicians that know our bodies better than we do, and cyborg surgeons saving our lives.

Also Checkout  How Does an Anechoic Chamber Work and What is it Used For?

Nanotechnology is already playing a huge role in surgery, particularly in oral procedures where miniscule nanobots have been developed to reduce pain and recovery time. Futuristic technologies are also playing their part in diagnosis, surpassing what even the most skilled physicians can do in some cases. One AI system can predict heart attacks and strokes more accurately than its human counterpart. Another AI technology is able to detect cancer risks before symptoms appear 30 times faster than a human doctor, and with 99% accuracy.

Politicians, activists, and even the great David Attenborough have warned of the grave consequences of climate change, while issues such as deforestation and pollution are also wreaking environmental havoc. Many of these concerns stem from the space and energy required to sustain a growing population in the modern world, so robots are stepping in to undo some of the damage.

For example, Australia is home to the GrowBot which plants trees 10 times faster than a human, and at half the cost. Instead of seeds, these robots plant established trees more likely to grow successfully in a new location. The GrowBot team hopes to deploy over 4,500 of these machines to help revitalise the world’s forests.

Elsewhere Down Under, we have the RangerBot. This robot has been designed to kill the crown-of-thorns starfish, one of the three major threats to the Great Barrier Reef. With 99.4% accuracy, the technology delivers a toxic substance only harmful to the starfish. And while six human divers could only cover half of the reef in a year, six RangerBots can cover the reef 14 times over the same period. The RangerBot can also monitor and gather data regarding coral bleaching, water quality, and pollution, and there has been strong interest in using it to save other coral reefs around the globe. 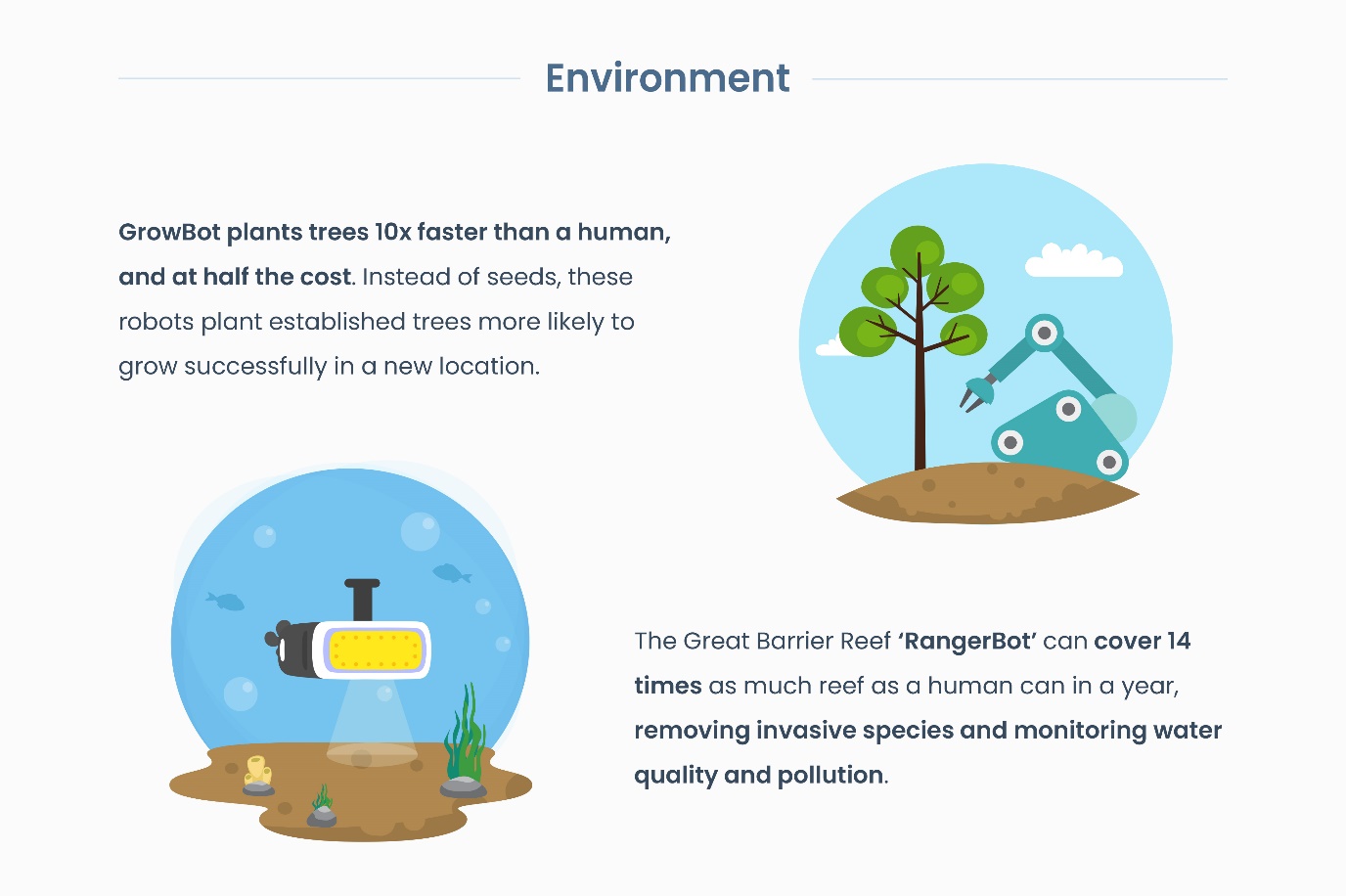 The 2011 film Real Steel is set nine years in the future, where all boxers—including its hapless leading man, the future great showman Hugh Jackman—are replaced by robots. Although they’re still remote controlled, these boxing robots possess human motor skills, and fight with the balance and fluid movement of expert pugilists.

We’re now one year away from Real Steel’s imagined future, and there’s still no sign of brawling bots being quite so advanced. However, since the film’s release, a handful of daring droids have undoubtedly become more athletically adept in other ways.

The annual RoboCup competition features football-playing bots powered by artificial intelligence. While the technology is fairly primitive at this stage, organisers aim to field a robot team capable of beating the human World Cup winners by 2050. It remains to be seen whether a team of androids can overcome the tiki-taka tactics of Spain or the flair and finesse of Brazil, but in basketball, robotics are a little more advanced. Forget LeBron James, CUE the ‘basketbot’ can shoot hoops at 100% accuracy. The current NBA average is just 77%.

Also Checkout  Look For Dual Qualifications With The PMI-ACP Certification 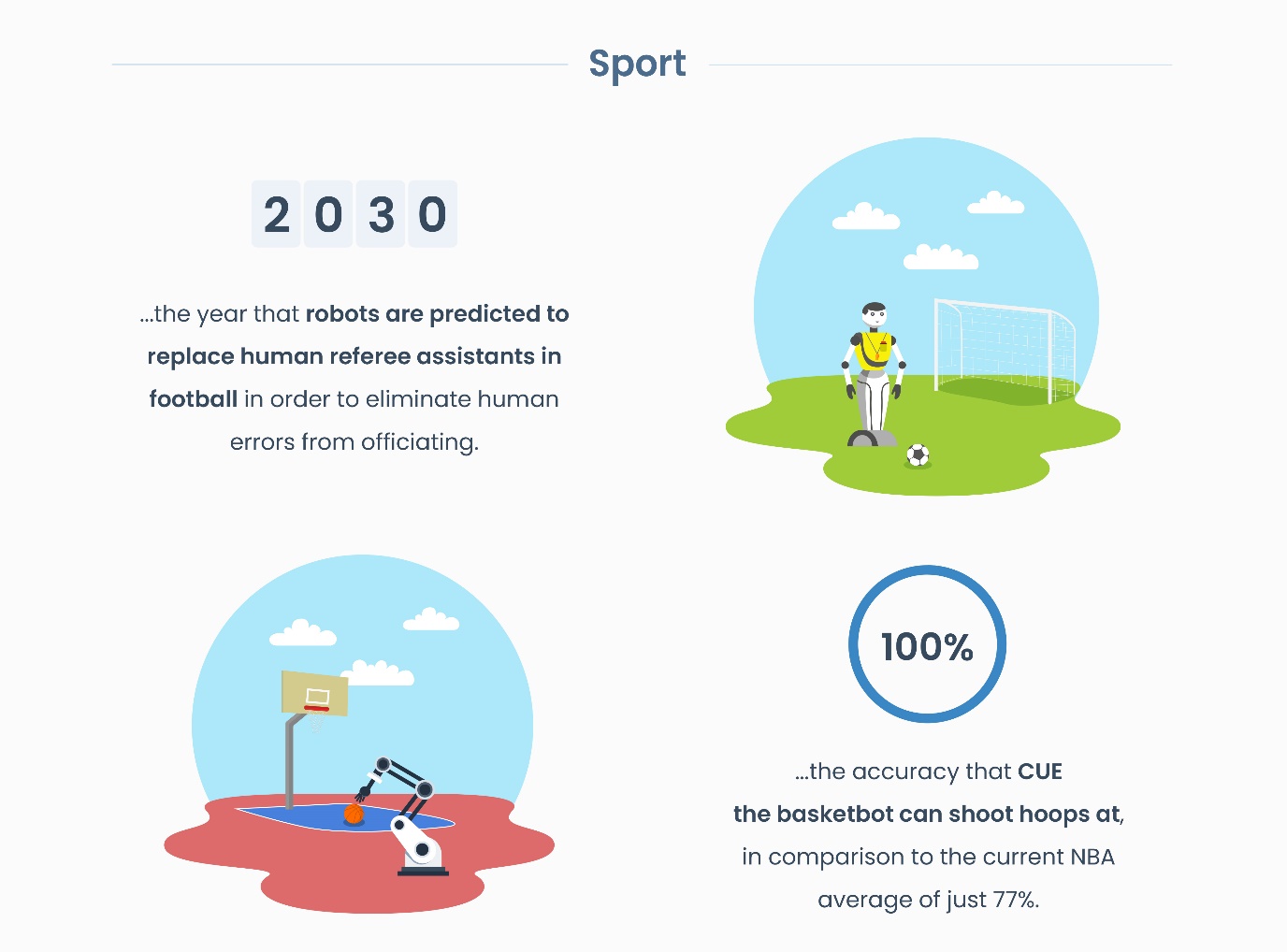 The food and drink industry has already seen significant upheaval in the last few years, thanks to start-ups like Deliveroo and UberEats revolutionising the humble takeaway. Now these companies are taking their mission statement to “transform the way customers eat” to the next level, by implementing drone delivery.

Food delivery by drone has already been trialled in Iceland, though avoiding the country’s long and treacherous roads was more for the convenience of drivers than consumers. Now, UberEats plan to roll out drone delivery by 2021, with the company’s CEO claiming it is his “personal belief that a key to solving urban mobility is flying burgers”.

But flying burgers and delivery drones you don’t have to tip aren’t the only way that the machines are taking over the world of food and drink. The market for robotics in the food and beverage sector, for example, is predicted to be worth $2.5 billion by 2022, with one study giving the industry an automation potential of 87%. This means only 13% of food and drink jobs couldn’t be completed by a robot. 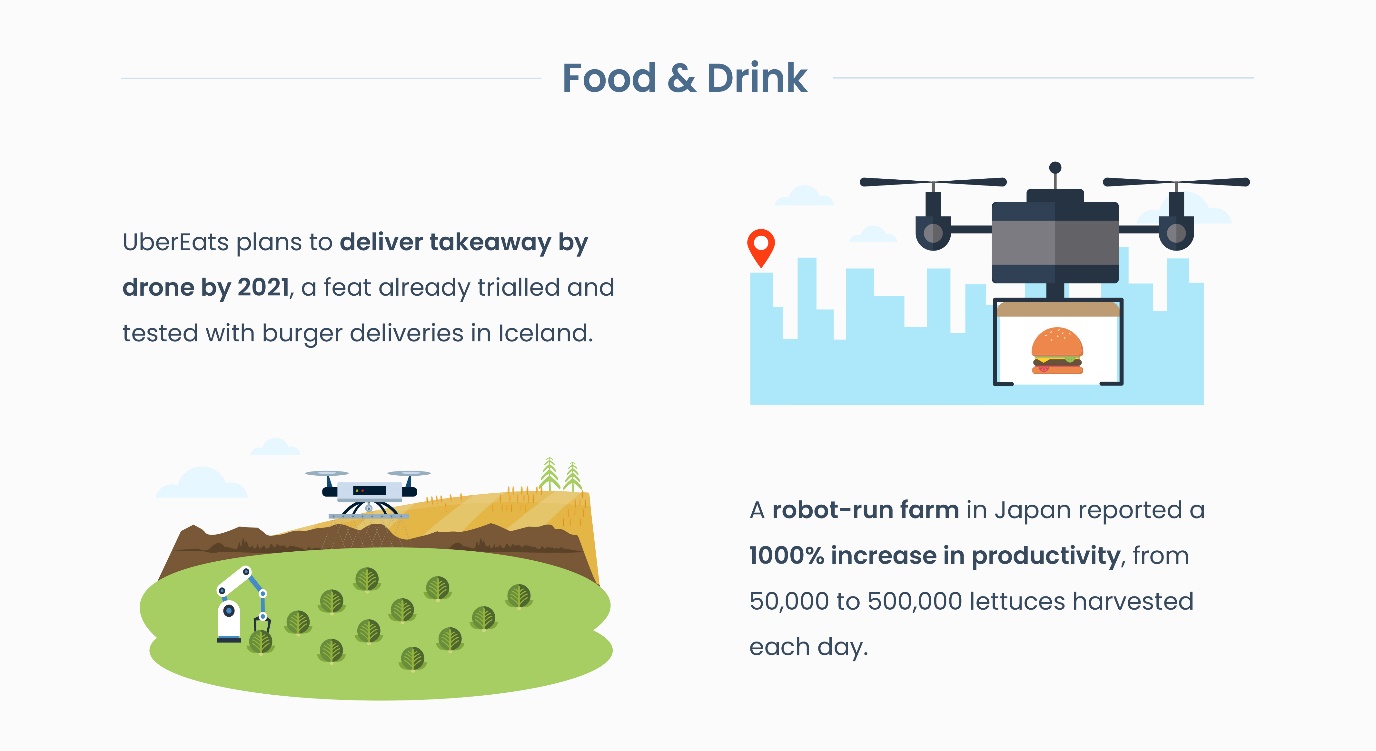 Imagine a holiday where a robot carries your luggage, checks you into your hotel, and then becomes your tour guide as you explore a new destination. Sounds good, doesn’t it? Far from being a futuristic fantasy, this is now a reality for some holidaymakers, with robots and machine learning technology infiltrating the travel industry.

Take TravelMate, a robotic suitcase that uses collision detection technology to autonomously follow its owner like some sort of robot puppy, so us lucky humans never have to carry our cases ever again. Meanwhile, at some airports, SITA’s robots Leo and KATE roll up to passengers to take their luggage for them and check them in. No more endless airport check-in queues is the goal.

Robots are being employed in hotels too. The aptly-named delivery attendant Dash brings amenities and room service to hotel guests much more speedily and accurately than humans. Another is Connie, a robot concierge that answers guest queries at various outposts of the prestigious Hilton hotel chain. Queries can be routine questions like directions to an airport or arranging for a taxi, or they can be something a little more personalised like restaurant recommendations – a useful asset for hoteliers when times are busy, leading to fewer complaints. 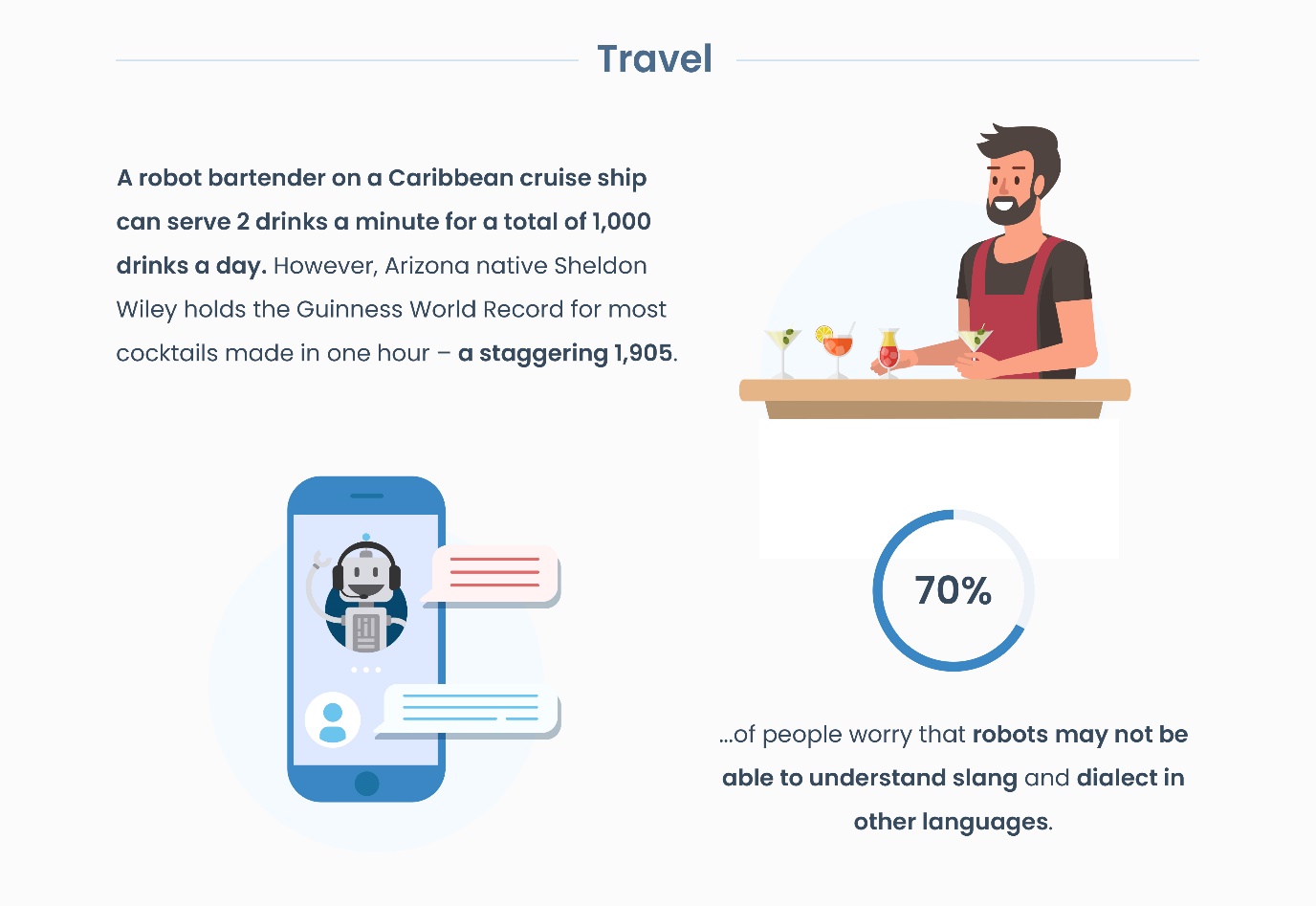 It Can Do What? 5 Surprising Things Your Phone Can Do