JavaScript is the scripting language of the web, and with over 20 billion devices connected to the Internet, it’s far from surprising that JavaScript has become the top programming language regarding usage and popularity.

One of the limitations of JavaScript, however, was that it used to be constrained to client-side scripting. That restru changed, however, with the release of Node.js, a server-side run-time environment that made it possible to execute JavaScript codes on the server. To take this further, Meteor.js is a full stack JavaScript framework that utilizes Node.js to enable the creation of web, mobile and desktop applications using JavaScript.

In this article, we take a look at Meteor.js and why it’s a promising framework for mobile app development.

The Meteor framework was first released as Skybreak in December 2011 by a startup called the Meteor Development Group, but it was quickly renamed to Meteor a month later. It’s a full stack JavaScript framework that’s built on top of Node.js and enables the creation of an entire web application. Currently, Meteor holds the most number of GitHub stars out of all web application frameworks, with 38,082 stars as of writing.

The main killer feature of Meteor that called the attention of the developer community is that it is isomorphic or universal JavaScript framework, meaning developers can use it for both client-side and server-side web development. With isomorphic JavaScript applications, the entire app is assembled on the server, bundled, and sent to the client. As a result, the client handles much of the logic of the application, minimizing loading times and taking a significant load from the servers, so that applications run smoothly and quickly.

Aside from Meteor allowing full stack development, it also allows cross-platform development with support for different devices and form factors. In addition to creating web applications, Meteor also enables the creation of native mobile applications, as well as native desktop applications, so the process of Meteor app deployment to different operating systems will require minimal effort. Thus, you can use Meteor build an iOS app, an Android app, and a web app with mostly just one codebase.

Moreover, Meteor is open-source, so its entire codebase is available to the public for use, and the online community of developers can contribute to Meteor by modifying its code, adding features, or fixing bugs.

Here are some of the top applications and websites that were built using Meteor, taken directly from the Meteor website’s Showcase section:

TECHNOLOGIES USED ALONG WITH METEOR FOR MOBILE APPS DEVELOPMENT

When developing a mobile app with Meteor, some knowledge or familiarity of a couple of other technologies is required, such as:

Here are five big reasons for you to hire Meteor developers or use Meteor for mobile apps:

Meteor supports multiple platforms, and this means that a developer only needs to write one application and deploy it as a web app and a native mobile application for Android and iOS with minimal if any, code modifications. Cross-platform means you don’t have to hire separate web, Android, and iOS developers to develop three different versions of an application, and ultimately, it will lead to considerable savings in app development costs.

Meteor is a full stack framework with codes that run smoothly from front to back, including database integrations. Full stack means that a single technology can be used to create all layers of an application instead of having to use different techniques with different layers, which is otherwise typical of full stack development. This feature results in much quicker development and can lead to additional savings.

Meteor’s codebase is accessible to the general public, and one benefit of this is that Meteor developers can rely on free and robust support from Meteor’s online community of developers. As of writing, there are a good 354 contributors to the Meteor project.

Mobile application maintenance usually is very cumbersome, because every time the developers do any bug fixes, modifications, or additional features into the app, they will need to resubmit a new version to the app store and wait for the updates to be approved and published. However, Meteor has a neat feature called hot code push, which allows developers to instantly update their applications directly without having to go through the submission and review process. This feature makes mobile application maintenance a breeze.

Many frameworks offer two-way data binding on the client, which allows the view to change as the model changes, and vice versa. Meteor takes this one step further with its tracking system that enables data binding from the client all the way to the server so that changes in the database will immediately reflect on the application views without having to trigger or code a synchronization mechanism. This feature gives Meteor real-time reactivity, and building a real-time web application with Meteor JS would be a piece of cake.

Let’s take a look at the usage of Meteor JS across different countries, and how developers from across the globe perceive the Meteor framework.

According to Alexa, a website that analyzes website traffic, the country that visits the Meteor website the most is the United States, with 23.0% of all traffic coming from that country. Then China (10.6%), India (6.9%), Japan (5.2%), and France (4.0%) follow. These data may suggest that usage of the MeteorJS framework is likely to be the highest in these countries.

Meanwhile, concerning web searches, Google Trends shows that the countries with the highest Google search count for the term “Meteor.js” are Ukraine, Ireland, Russia, India, and Canada. These data suggest a high level of interest for the Meteor framework within Europe. 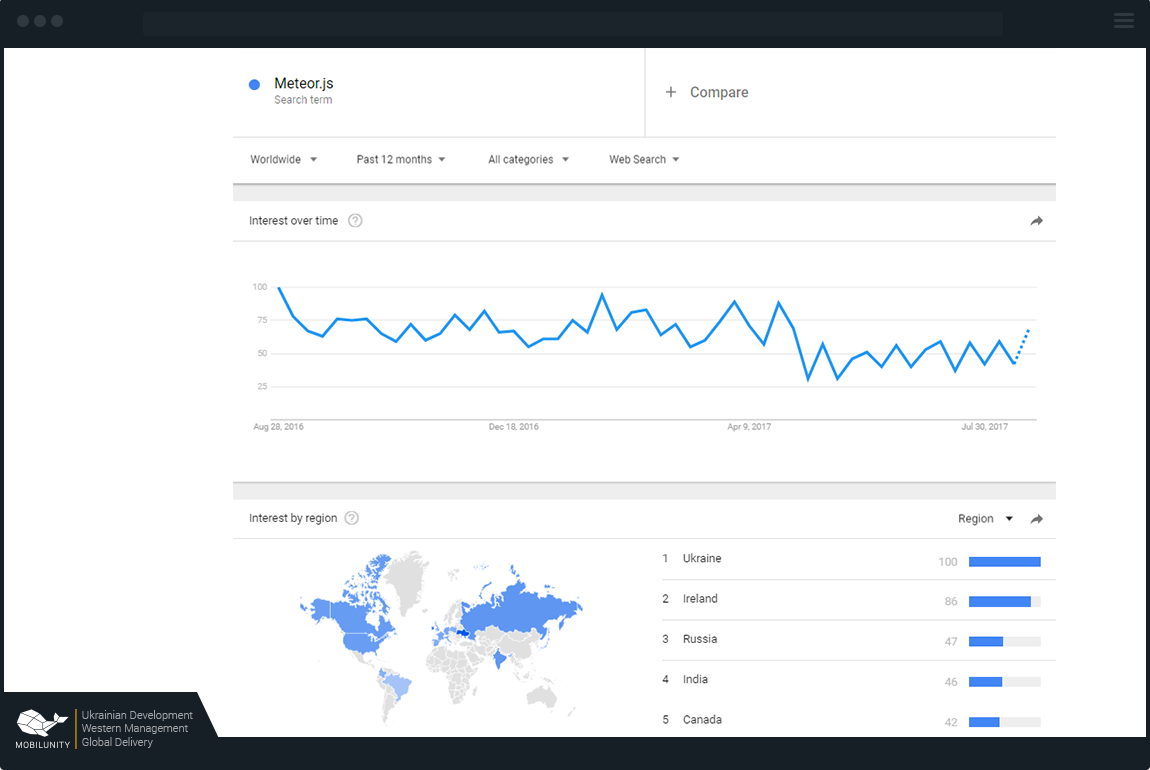 Google Trends Data on the Google Search Trend for Meteor.js

According to The State of JavaScript 2016 Survey results, among all full stack JavaScript frameworks, Meteor.js is the most popular among JavaScript developers regarding familiarity, with 90% of all respondents having heard of the Meteor framework. Moreover, 19% of all respondents have used the Meteor framework at least once, making Meteor JS the second most used JavaScript framework, next only to the MEAN stack at 33%. Besides, Meteor JS holds a 59% satisfaction rating, meaning 59% of all the JavaScript developers who have used Meteor.js before, say that they plan to use the framework again in the future.

Use Meteor JS For Your Next Project

We have explored the benefits that the Meteor framework offers to mobile development, and how it makes it very convenient to create a Meteor Android app or Meteor iOS app instead of going the usual route of using native mobile application languages. We have also taken a look at the popularity the Meteor framework in different countries, and how developers perceive it. For your next mobile app, you should give Meteor JS a chance and find the right dedicated Meteor JS or Node JS developers for hire to help you create the perfect portable and cross-platform application.

It Can Do What? 5 Surprising Things Your Phone Can Do

Why sports fans are lucky to have technology amidst the pandemic

How To Start Your Own Engineering Business