by Abhishek Yadav
in Web

With the advancement in technology, we are seeing lots of companies opting for eCommerce stores to grow their business.

Although there are lots of positives of the internet, it is not short of limitations either. This is where as a business owner there is always a doubt in your mind when it comes to internet security.

Gone are the days when we used to live in an age where honesty was the best policy. Today, we are living in a man-eat-man world where nothing can be taken for granted.

Recently we are seeing a rise in a new kind of online attack mechanism popularly known as Cyber Extortion or Online Ransom Attacks.

The problem with this online attack mechanism is that the hacker accesses the web files of the eCommerce store and then encrypts it. Then the file is kept on a secret server which is somewhere on the internet.

The hackers then demand huge ransoms in the form of Bitcoin currency (the new digital currency) to retrieve the website data.

So, in simple words, your data gets kidnapped and the people who are responsible for this ill-deed demand huge ransom to get it back.

This makes online stores quite vulnerable. They simply become a revenue generation alternative for these hackers.

Nowadays there is a growing menace of KimcilWare.

KimcilWare is another ransomware which poses a greater threat to Magento eCommerce stores.

Let us look at how KimcilWare works.

The Working Mechanism of KimcilWare Attack on eCommerce Stores

During this attack, the hacker simply employs a minuscule program or script to find any vulnerable area in the server.

There are two scripts which are run.

The first one is used to encrypt all the data and secures it with a KimcilWare extension to the encrypted files.

The second one attaches the (.locked) extension to these encrypted files.

In addition to this, it generates (README_FOR_UNLOCK.txt) file in every folder as a ransom note.

To restore the files, typically the hackers charge something between $140 to $145. Certain hackers do not show any apprehension in demanding Bitcoin payment too.

One way to resolve this concern is by hiring a reputed Magento development company.

This write-up has solely been written to provide you valuable inputs in overcoming these ransomware attacks on your eCommerce store.

We promise that after reading this content piece you will have a positive outlook towards Magento development companies and may even hire one to overcome the problem of ransomware attacks on your eCommerce store.

But, before we look at the different ways it can help evade this serious problem it is important to answer an important question: Why hackers single out Magento eCommerce Stores for carrying out this bad deed?

Reasons that Magento eCommerce Stores a Vulnerable Platform for Hackers:

Magento development has become much-favored platform for online businesses. Thousands of eCommerce Stores have opened up in recent times which are able to churn up millions of dollars on a daily basis. The problem is, most of these stores are very easy to target by hackers since there is a lot of sensitive information traded on it. The other thing is since there is lots of information being traded on these stores it becomes critical for them to resolve the problem quite quickly. Even faster than other websites. This is why Magento eCommerce stores have become a vulnerable platform for hackers.

Like any other website, it is important for Magento developers to integrate safety precautions to keep it safe from hackers. This is where availing high-quality Magento development services can make a hell of a difference. The amazing part is by affiliating with a good company it is possible to track your entire server for any minute details to prevent any mishaps from the server-side.

Now, that you have understood the reasons that make Magento eCommerce stores a vulnerable platform for hackers to exploit, let us divert our attention on different things that a reputed Magento development company can do to overcome this looming threat.

Keep your Server and Store Updated on a Regular Basis 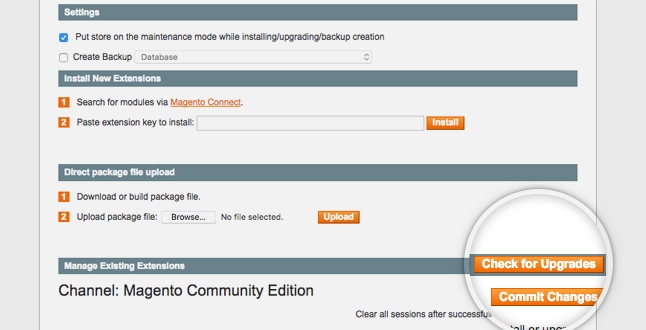 Remember, the left time you got ill? It was when you were attacked by deadly viruses that made your nose run, gave you a headache, and even high fever. Why? Because you were vulnerable to outside threat due to the weak immune system. The same thing happens when malware attack identifies vulnerabilities in the software that run the server. It is possible that the glitch is in the eCommerce application, the software stack or the framework. This makes it all the more important for your eCommerce application and its extensions to remain updated on a regular basis.

You can resolve this concern by transferring to the managed hosting. In order to maximize the effect, hire a professional Magento expert today and use the tips given below.

It is important to have a regular schedule on a daily basis for data backup.

You can select an off-site location or a third party service which can be assessed even if your computer system slumps.

We advise you to divide your backup files in multiple locations and on different media.

If there is an already installed ransomware get rid of it completely before restoring the backup data.

Give Privileged Access to Reduce the Scope of Data Theft

Adopt a high mitigation strategy to ensure reduced risk impact and restriction on the occurrence of data theft.

There are couple of things that your online store can do in order to put this into practice, like restricting admin privileges, patching, and application whitelisting.

You can practice measures like enabling those applications access that has authorized permissions to run on your system.

By availing the services of an expert internet security professional it is possible to mitigate the risk of ransomware attacks on your eCommerce store.

Spread Awareness about Data Security in the Minds of Your Employees

Employees are the strength of any organization.

This makes it all the more important to spread awareness amongst them about the serious damage caused by ransomware attacks.

You can do this by asking them not to browse websites that are not secured and are of high risk.

Prepare them by holding seminars. Alternatively, you can even spread the message through a communication medium that is used in the organization.

If you need to recruit a security consultant who can work as a guiding force to train the employees using real-life examples and even well-informed videos.

A Nail in the Coffin

If in case, your eCommerce store gets attacked by ransomware it is important not to give in to their demands. Remember, during such times you are not fully prepared for it and so chances are you might want to give in to the demands of the blackmailers for getting immediate gratification. But, this is the biggest mistake that you will ever do. These blackmailers utilize the amount you pay to develop an even advanced ransomware to infect more people like you. By paying the money, you are putting yourself at a bigger risk in the near future.

Instead of this, invest in a better system, educate your workforce, and create enterprise security solutions for a better future!

Harshal Shah is the CEO of Elsner Technologies Pvt. Ltd. He has an overall experience of more than three decades in the IT industry. His area of interest lies in writing interesting pieces of content mostly on topics relevant to different types of CMS platforms. He wants to ensure that readers get acquainted with multiple web development tools &amp; techniques so that we are able to build a technology-driven world for the future.

6 Awesome Things a Website Redesign Will Do for You

A font’s role in a website’s performance

Bitcoin vs Litecoin vs Dagcoin | Comparison 2019

7 Ways to Save Money on Your Cable TV Bill