Ever had the opportunity of going through the various funny chats in the Internet? It is truly funny, and comes with conversations that would ideally not have happened, but they are obviously known to be fake. Notwithstanding the nature of being fake, it is still extremely funny, and will be riveting to many people who think of it as anecdotes to their childhood. So, obviously, there is a method with which you would be able to achieve this particular feat.  Creating fake Facebook chat is no more a problem with various applications in the market. So let’s have a look at it. 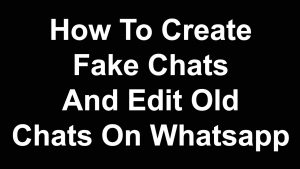 What are the things that you can achieve with the Yazzy android app?

You can create fake conversations in the context of;

And a lot more. Each of the conversations that you possibly create with this application can be customized beyond belief, and a lot of things like the navigation bar as well as changing the avatar and a lot of other things can be possible with the customization feature of this application.

How to create fake whatsapp chat?

Steps to get the application ready: –

The process to help you create fake conversations: –

This is a general process that has been outlined which helps you to create fake Facebook chat or fake whatsapp chat. There are absolutely no problems, no hindrances, and absolutely no worries for you if you manage to use this for your own commercial benefit. After all, the software has been created for the sole purpose of doing this.

With your intention of trying to create fake whatsapp chat, you find that there is a likely market for the people that are more than interested to read such interesting conversation. So, cater to them, and you would be able to build a loyal following to this artistic capability of yours. Within more time, you would be able to gather a lot of people as your loyal followers.

The Ultimate Guide to Whatsapp Marketing

How to recover deleted emails from gmail?

How to fix there was a problem parsing the Package error?

How to use Airdroid on mac?